Our crowd is wide and diverse here at Trent Bridge today and to get the most balanced view of how the game was going we talked to a Clifton couple and a New Zealander (albeit he has travelled down from Yorkshire!)

listen to ‘The view from the (local) boundary’ on audioBoom 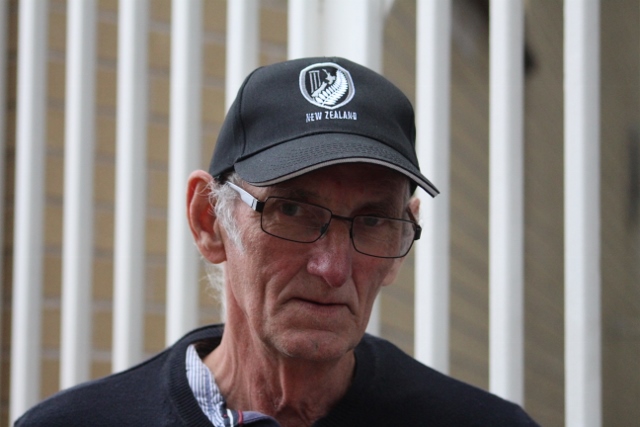 listen to ‘…and the view from the North Island’ on audioBoom

The entrance to the pavilion is one of the busiest and most important areas to steward. You have to be switched on at all times. When we spoke to the steward on the door, who talked us through the precise process.

Only people with valid passes and membership can be allowed in to the pavilion, meaning the stewards must check more fans than at any other stand. He said “you get to know the regular people who go in and out.”

H also said “Sometimes you get people trying to get in on the sly, but i stay on the ball”. People keep moving and getting to their seats.” 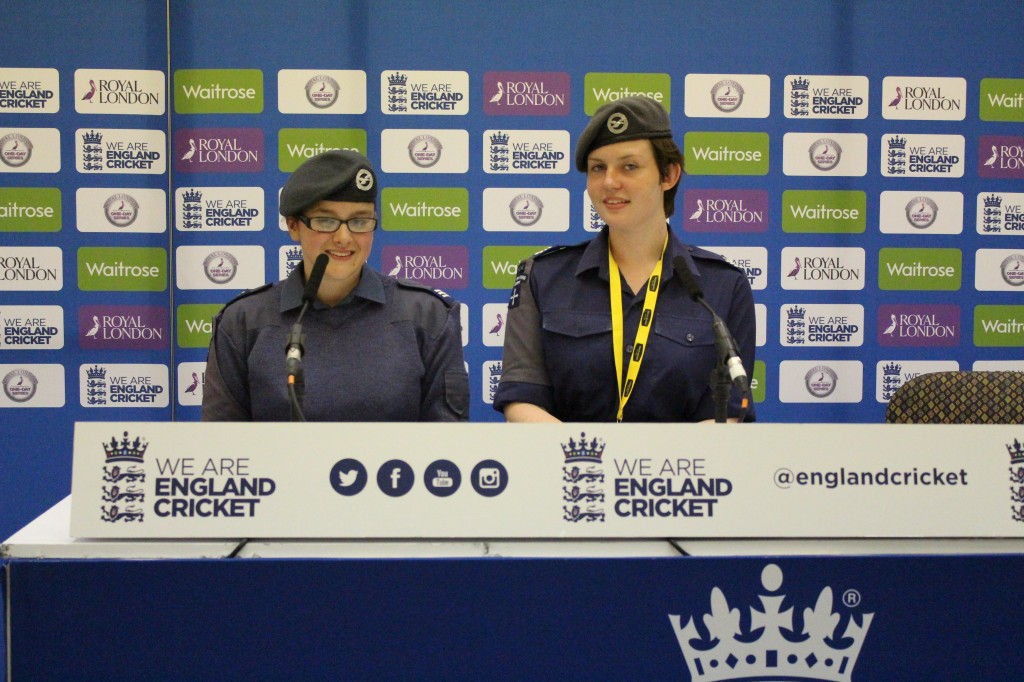 … and the Express, Metro, Independent, Times and other newspapers who have reporters here today.  Once the match is over they will descend on the squash courts behind the main pavilion, where the post-match press conference will be held.

This area is being looked after by some of the thirty plus members of the Air Cadet Corps who are here today to help out. We spoke to Nicole and Nicola from the 504 West Nottingham Squadron, who have been guarding the press conference area this afternoon.

Nicole helped out last year and said “I love it”. “The staff at Trent Bridge look after us, the are all very friendly and there is a great atmosphere”.

As well as looking after the press conference area, they have been working with the the Trent Bridge  Ashes Legacy volunteers (they are the ones in the purple T-shirts) to make sure that spectators are welcomed,  providing directions to people from the car parks and running a ‘photo booth’.

So far they have had a quiet afternoon, but as Nicole says “After tea it could get rowdy’. She could be right, especially if the match is as close as the others have been in this series, but at least it will give the press lots to talk about after the match. 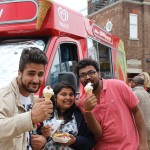 Have an ice cream 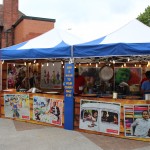 Or even a curry 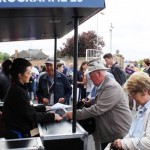 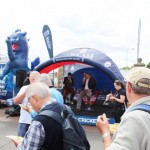 Star interviews on the ECB stage 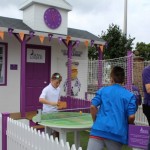 A game of table tennis 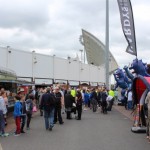 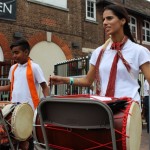 Listen to our group of talented drummers 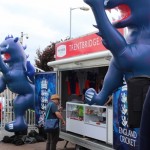 Maybe treat yourself to a replica shirt 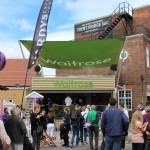 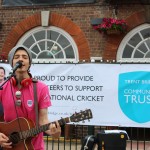 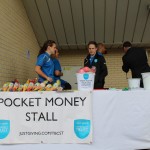 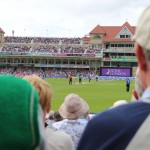 And after all that, take your seat and enjoy your experiance at Trent Bridge.

A Nottinghamshire based sport in the community company are leading the way with their community work and are showcasing their projects on the big stage.

The work of the Leadership Academy Network was visible for all to see at Trent Bridge today with lucky children getting the opportunity to form the guard of honour for the players as they entered the field of play for the fourth ODI in The Royal London Series.

The volunteering organisation are working closely with schools and local cricket clubs to provide amazing and life changing experiences to children.

Not only are they showcasing their fantastic work with experiences for these children like making the guard of honour, they are able raise the awareness of their brand through the use of television at these big live international cricket matches.

Controlling thousands of fans at the cricket is a huge task. If you’re wanting to move across the stands during an over, you’ll cross the path of the steward who will stop you until the over has finished.

This is a big job around the whole ground. It enables seated fans to get full view of every ball without being blocked by others moving back to their seat.

One steward we spoke to has been doing it for years. He also controls the rope in the walkway for domestic t20 blast games and says its an enjoyable job to do. It’s jobs like these that keep the fans moving and the game in focus. 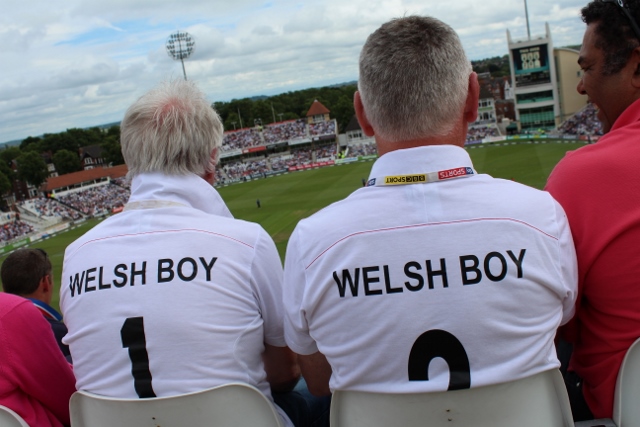 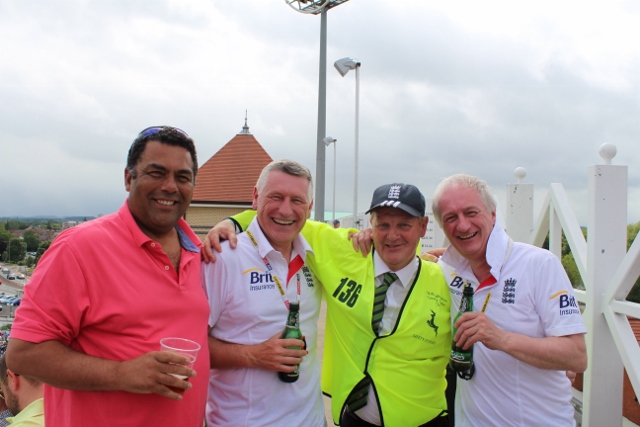 Jeff and Phil are brothers from Swansea.  They are here today at the top of the Radcliffe  Road stand enjoying the view of their favourite ground from their regular spot.

Phil told us “We’ve been coming here for over ten years.  It is the best ground in the country.  The view from the Radcliffe Road stand is outstanding, and the staff here have got to know us and always give us a warm welcome.”

His brother Jeff, who now lives in Wollaton, adds “We have never had a game rained off, and we end the day with a curry and a taste of the Nottingham nightlife”.

As the clouds darken over Trent Bridge their optimism is not dulled “It’s just the top of the beer blowing off in the wind” Phil says “There’s no way play will stop today.”

Conwyn Cricket Club are here!  The club have built their day out at Trent Bridge around a number of  games with local cricket clubs.  In tribute to their hosts, they have all come today in Robin Hood dress.

All except for Patrick, who as the Englishman in the team gets to dress up as Maid Marian. He told us “We are having a great time.  We played Nutbrook last night, and tomorrow we play Notts and Arnold”.

There are fifteen of them on the tour, plus one or two extras who have joined them today. “Trent Bridge is a great place to see cricket”, Patrick adds “It’s really friendly and we have been made very welcome”.

With fourteen Robins for company, this is one maiden who looks likely to have a long day in the field.